Fifteen Norwegian Architecture students went to Thailand to build Safe Haven Orphanage’s first library on a budget of $4,650 in January of 2009. 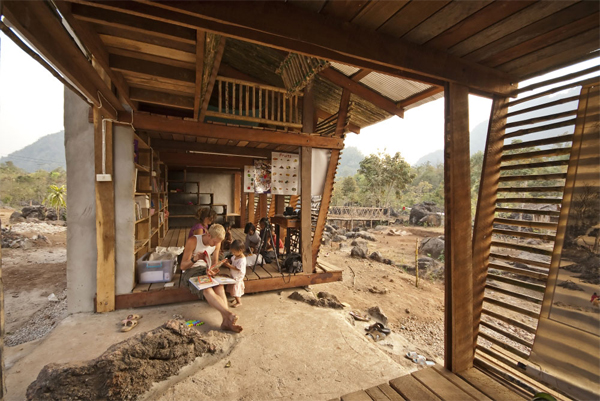 It is amazing the climate demands only one wall and an overhang. Removing the midsection to play with light was a great idea and it throws in the use for a gangplank!

If only Americans were more willing to embrace nature instead of sticking to the confines of a controlled climate! Really, who needs conditioned air all the time? I only like it at home, work, in my car, while I’m shopping, at the gym…..oh.

P.S. I don’t condition that much of my air, only the hottest of nights in the bedroom and the hottest of days when I’m in the office (the rest of the house doesn’t have AC), which was probably only 30 times total this year. Also, I spent the first half of the summer in the house because I broke my right fibula and the second half starting a food truck – which means no work or gym AC.